We have made a LOT of changes to our guest room since we moved into our house last year.
This was the room when we walked through the house before buying. 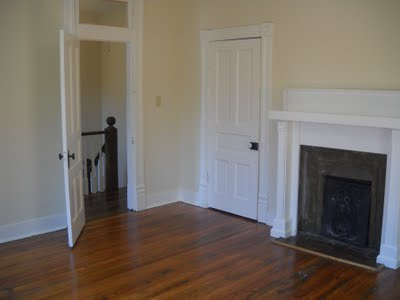 It has the largest closet in the house, which was very poorly utilized.
It has a non-functioning fireplace, which is OK with me.
(It's non-functioning because there was previously a fire in our house, which originated in this fireplace.  It is the only fireplace in our house that has not been converted to gas, and after the fire the chimney in our house was dismantled.)
It had builder color cream paint.
It also has amazing hardwood floors, a fabulous transom window, and a huge window seat.
We were going to make this our master bedroom.
Until we realized there was no way our bed would fit up the stairs. 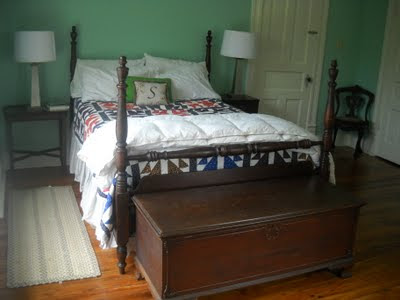 We bought a great bedroom set from a family friend.  We got a full size bed, hope chest, dresser, vanity, and two side tables.  For $50.  Yes, I'm serious.  It fits perfectly in the room, and the style matches the rest of our furniture.  I'm not a real modern furniture girl - I like very traditional things.  So this is how we had it once we painted the room.  We used Martha Stewart's sea glass paint from Home Depot.  I tried about 10 different colors before I found the one we used, and it's exactly what I wanted. 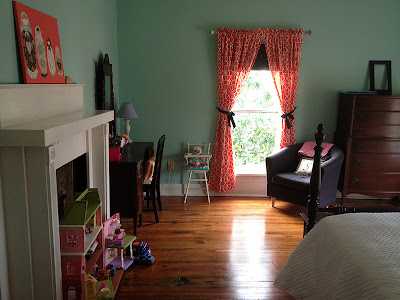 This is what you see when you walk in the door now. 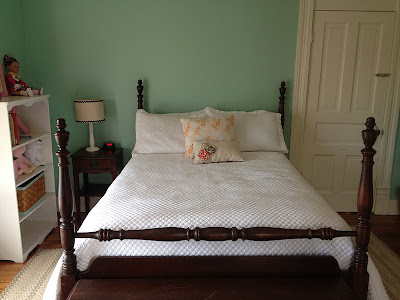 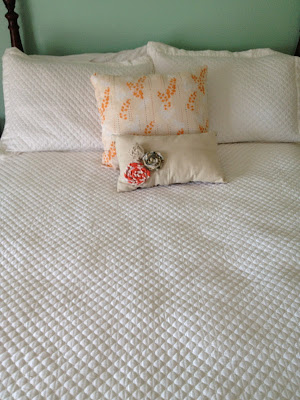 I made the two pillows that are on the bed.  I'm going to make some more to add, and will likely monogram the shams once she's home.  Right now the plan is for her to sleep in this bed.  We may start with a toddler bed for her, but this will eventually be where she sleeps. 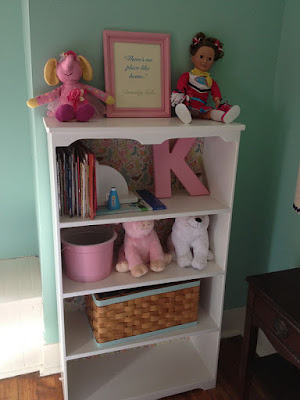 This is the bookcase that I redid - it was a simple project with just a few coats of paint and some scrapbook paper on the backs of each shelf.  The basket and bucket were a couple of projects for me, and I painted the frame on the top shelf and the K.  The elephant and doll on the top shelf were Christmas gifts for Katie, as was the polar bear. 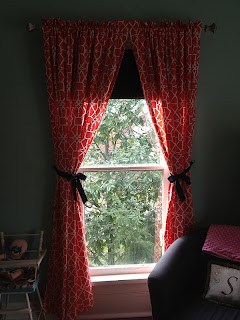 My mom made the curtains.  They are perfect, and I L.O.V.E. them.  The fabric is from Joann's, and I was unsure about it when I first brought it home.  I had a piece taped on the wall for a long time before I decided to do it.  I love it.  It is much more bold than I usually would choose, but it's exactly what I was hoping it would be.  The tiebacks are just a wide navy grosgrain ribbon held back with a small hook. 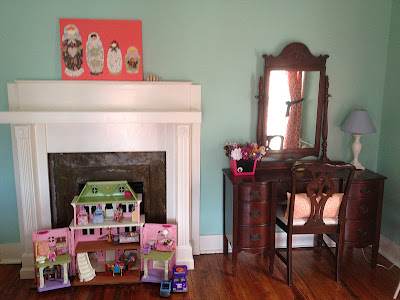 The lamp on the vanity is my next project, and I have something in mind already.  It's a lamp that I had in David and Henry's old room, and while the colors aren't what I want to use anymore, the lamp is perfect for the space.  I've already started to re-do it and will show you when it's done.  The chair at the vanity was a chair from my office that was going to be thrown away.  I recovered it and made a small pillow for the back. 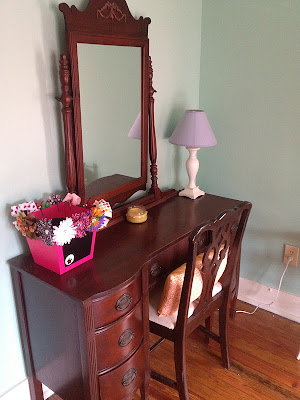 See that basket of hair bows?  It was donated to our silent auction for the Coins for Katie Pancake breakfast.  Someone paid $45 for it.  And gave it to me for Katie. 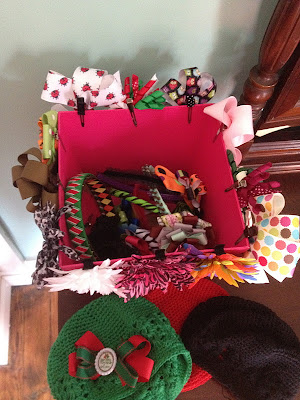 Let's just say I hope the child will keep a bow or headband in her hair... 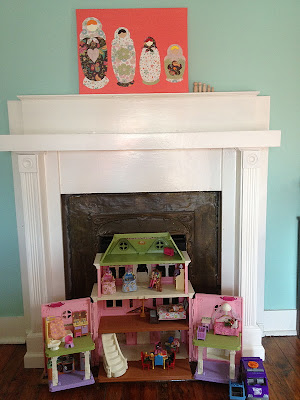 I made the art over the fireplace, and am now searching for something else to put on the mantle.  I have some ideas, but nothing that I've started yet. 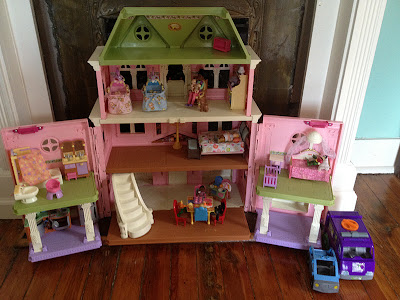 The dollhouse was a gift from my friend Brandi, and Jack loves it.  Like, pink puffy heart loves it.  He has moved Batman, Robin, and Mr. Incredible right in, and they've quickly taken over the childcare duties.  He's also backed his batman van and a lego van right up so they've got some transportation. 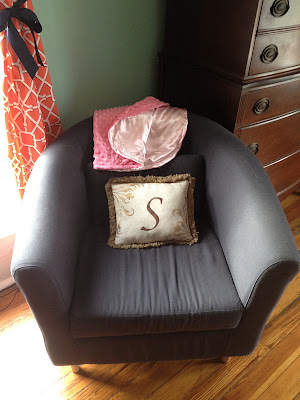 I moved this chair in from the playroom.  Mostly because it was constantly getting turned over and used as a launchpad for a small boy when it was in the playroom.  I like it in this room, and Jack and I have broken it in here in its new space and have read many books and snuggled here.
I still have to decide if I will make cushions for the window seat I didn't show you, and what to do about a rug.  I'm thinking I want an area rug, maybe in sea grass or something similar.  Overall, I'm quite happy with how the room has developed so far!
Posted by Unknown at 13:56