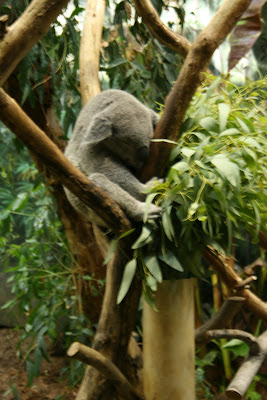 On our second full day in Cleveland, we went to the Cleveland Metroparks Zoo.  Our kids are some big zoo lovers, and because we are Nashville Zoo members we were able to get into the Cleveland Zoo for a very discounted price.  Even better! 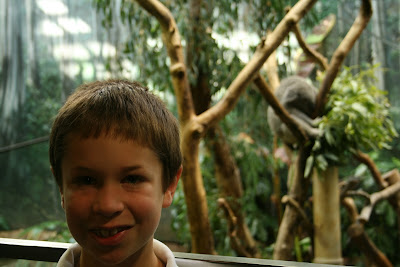 The first animal we saw was my favorite - the koalas! 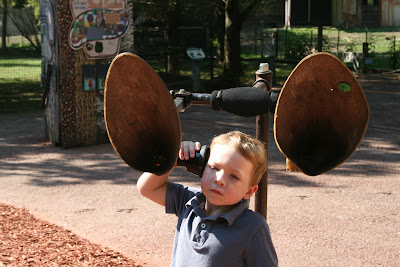 Jack tried so hard to hear Henry and David with these Kangaroo ears, but I don't think it worked. 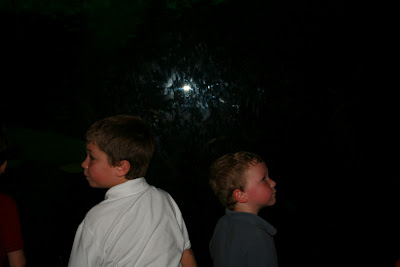 I don't know why this picture cracks me up, but it does!!  We were playing on the big treehouse when I got a text from Joyce.  She and Sarah wanted to know if they could join us at the zoo - I was so happy for them too!  We were all excited to see them again, and I'm so glad we got to spend more time with them. 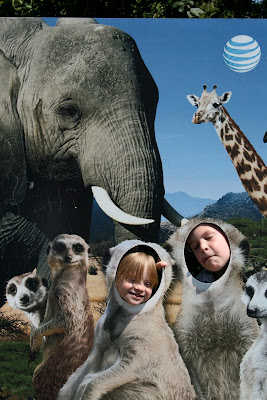 Katie immediately knew what to do with this little photo thing.  She just stuck her little face right in and cheesed it up. 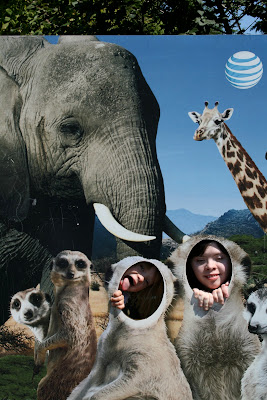 Here's Sarah and Katie.  Katie is giving me a big "DAAAAA!" which is what she yells when she's excited. 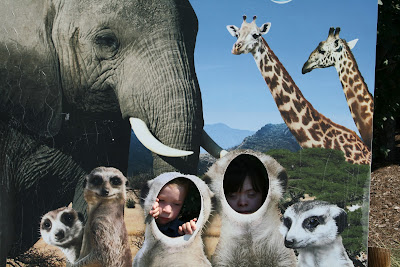 And everything Sarah did, Jack wanted to do too.  Sarah's found a friend for life in that boy. 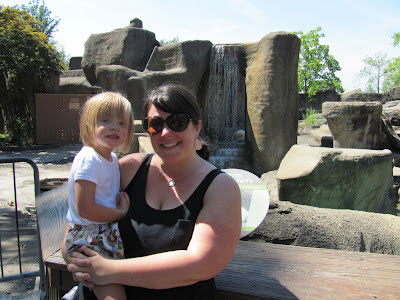 We spent a lot of time at the polar bear (which you can barely see under the waterfall behind us).  I love this photo that Joyce took! 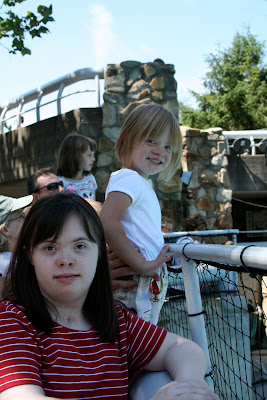 And I LOVE this one of Katie and Sarah! 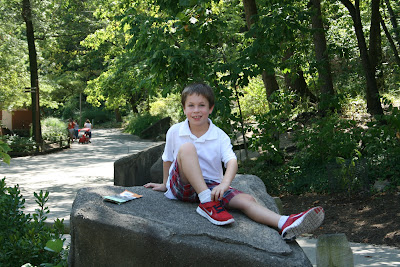 David was all about climbing on every rock he found and wanted me to take his picture each time.  He was very well behaved and, in fact, I probably am long overdue for a post about how much David has changed in the last six months or so.  It's a lot of pleasant changes, and the zoo day was a great example of that. 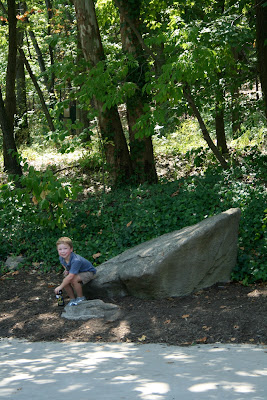 Jack spent a lot of time at this rock jumping off and climbing back on.  He also made one of those pressed pennies when we first came into the zoo, which he was throwing off of the rock.  Into the mulch.  Do you see where this is going?  He lost his penny, and he was so upset.  Henry swooped in and saved the day when he gave Jack his penny. 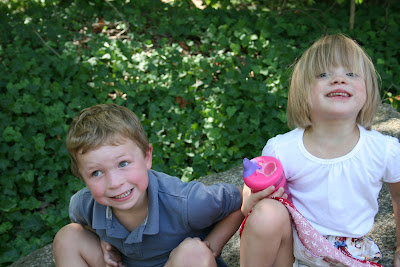 These little monkeys had a great time.  Katie really likes the zoo. 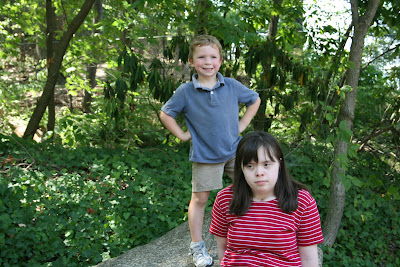 This cracks me up, because I feel like Sarah looks a little irritated with Jack.  I'm not surprised, because he was with her CONSTANTLY that day.  He showed her everything there was to see, shared popcorn with her, and talked to her all day long.  She was so sweet with him. 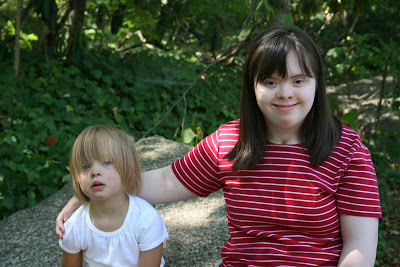 Katie looks a little rough here, but Sarah looks so great!  What a sweet day we had. 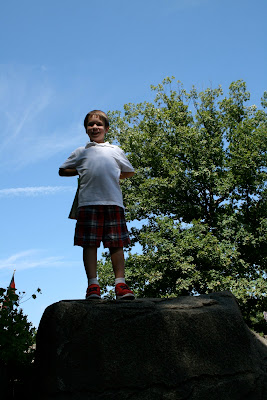 More rocks . . . He tried to scale a completely vertical wall of rocks.  Um, no. 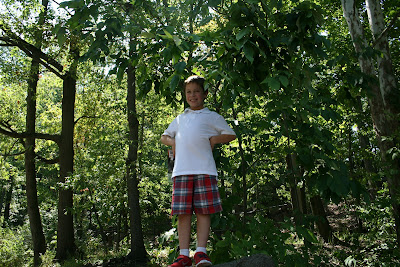 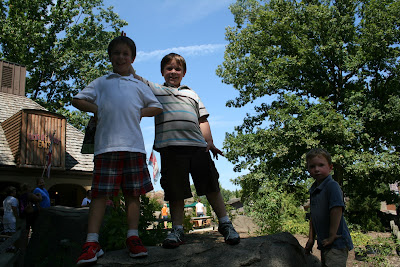 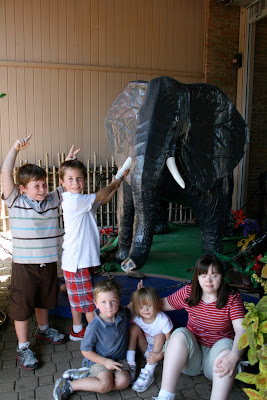 We were all very impressed with this elephant.  It's made out of Duct Tape.  It took 130 hours and over 5,600 feet of Duct Tape to make, and it weighs 300 pounds.  I'm pretty sure Henry wants to make one. 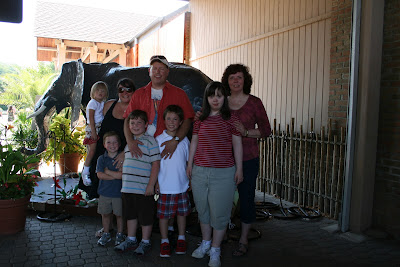 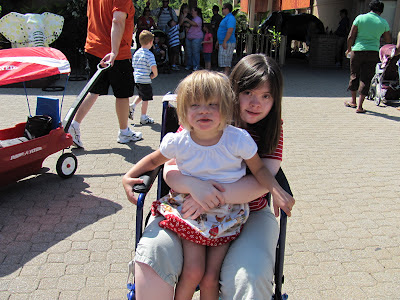 After we saw the animals, Katie and Henry headed back to the car for a little rest with Chris.  It was quite hot at that point, and we had been at the zoo for about four hours.  Sarah, Joyce, David, Jack, and I all headed to the rainforest.  It was really a neat place, and the boys loved it. 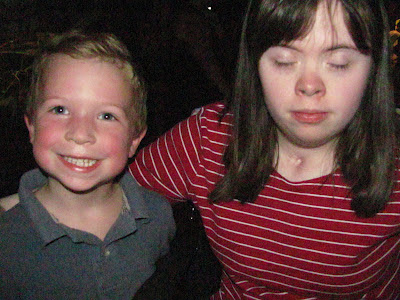 Perhaps my favorite part of our trip to the zoo was seeing Jack with Sarah.  It gives me such pride to see him interact with people.  He is so wild and crazy, but he is also incredibly sweet and caring. I couldn't help but think several times while we were with Sarah about what he will be like with Katie as she gets older. 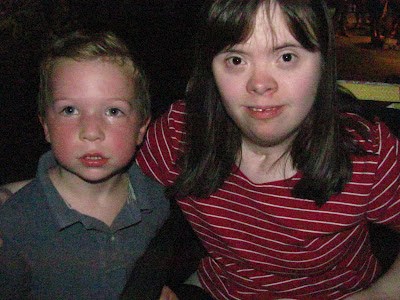 He had lots of questions for Sarah about her trach scar.  Joyce was so great about answering them, and I hope he was respectful with the questions I didn't hear!  We had such a great day, and I hope we see Sarah and Joyce again soon!
Posted by Unknown at 03:34