One thing I was sooooo excited about when we moved to this house was the huge playroom.  I'm sure someday we'll turn it into a bedroom and split the boys up, but right now we have an enormous, 20x20 playroom.  I was so happy to have a place for all of their toys, somewhere that would just be the kids' space.  I even said, "Who cares if it's a mess?  Just close the doors and nobody has to see it."  Yeah, I don't really feel that way.  We have slowly but surely just ended up with the room always being a mess.  Like, hey it looks like someone broke in and dumped all of our junk on the floors, threw couch cushions around, and dumped the bookcases out, kind of mess.  Nobody was picking their toys up anymore.  Nobody would put anything away.  I had to beg and plead with them to pick up their.own.toys.  Um, no.  I'm not doing that.  If you can't take care of your things, you can't have them.  I will not beg and plead with my children to act like normal human beings and clean up after themselves. 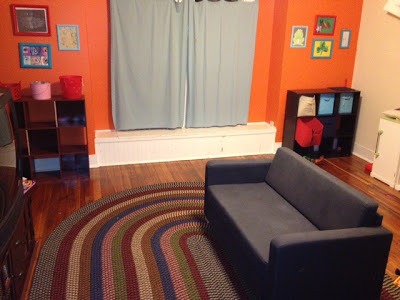 This is what the playroom looks like now.
Nice and neat right?
And empty.  Every single toy has been put in our attic. 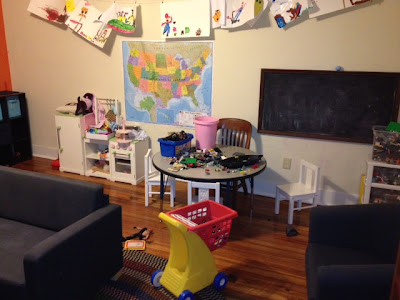 That is every toy that they have available.  The Legos stayed, for now, as have the dishes for the kitchen and the Mr. Potato Heads.  If they don't clean them up, those are gone too.  I guess at that point they could play outside.  The WiiU stayed, but they only get 30 minutes a day on that.  The books stayed also.  They're free to read as much as they'd like!  When they can show us that they can pick up when they're done playing with something, we will slowly give the toys back.  I promise you, a lot of the toys will not come back.  We are due for a toy purge, and now is the time.  They were livid!!!  They didn't believe we would actually do it.  And I'll be honest with you, I wasn't 100% sure Chris would do it.  He surprised me!  We'll see how it goes.  I think they will start to clean up in a more appropriate way, and I also think they won't miss 75% of the toys that are gone.
Posted by Unknown at 02:55