In May, I posted Q&A Part 2.  (For Q&A Part 1, which is oddly one of the most frequently read post, go here.  For the answers, go here.)  Here are the answers to the questions I got in round two (some of which were in comments or on Facebook, not necessarily all in the Q&A post itself).

1.  Will you do it again? (Obviously meaning adopt again)
I would love to adopt again, and it's certainly something that we're open to, and will remain open to.  However, four children is a lot.  We are a single income home (my income now, although in the past it has been my husband working and me staying home), and we want our children to be able to participate in things like baseball, swimming, cub scouts, etc.  All of that costs money.  There are also the obvious financial ramifications of having multiple children with special needs who require therapies, more frequent doctor's appointments, and things of that nature.  We want our children to go to college.  If we adopted again, it would be another child with Down syndrome, and there are obvious life long commitments that come with that. We do not want to financially struggle because we have a large family, so for now our answer is no.  Four children will be it for us.  I think.


2.  Was your husband on board from the start?
Yes, Chris was all in from the very beginning.  We have talked about adoption for years.  When we learned about Reece's Rainbow, it was a done deal.  Chris actually picked the three children we initially asked about from the RR site.

3.  What was your best and worst moment on this journey?
This is a hard one for me!  I think the worst moment was finding out that Katie had been transferred to the institution.  We found out eight days before we left for our first trip.  Her transfer likely ended up being a blessing for her, because she was in a fabulous facility.  The best moment was meeting her for the first time.  All of our hard work and waiting was so, so worth it.  We knew from the first meeting that she was our girl.

4.  I'd love to know more about your first trip to the orphanage and, if by chance, you met any of the other RR kiddos.
I wrote about our first trip to the orphanage here.  The institution Katie was in has about 250 children, not all of whom are adoptable.  Some children are there because their parents are dead or in jail, and there is not really a foster system to take those children.  Others are there because they have emotional or other medical needs that their parents cannot meet.  Several of the children are visited by their parents, but they are in the institution because they will receive some semblance of an education where at home they would not.  Katie was the first child ever adopted from her institution, in the over 25 years it has been open.  We were the first family to come visit an adoption eligible child.  They didn't even know where to put us for the first visit, because they had never done one before.  We were a bit of a spectacle.  We did see one other Reece's Rainbow child, at my request, because she is being adopted by a family who lives near us.  She and Katie were in the baby house together, and they were transferred together to the institution.  Other than that, we were not allowed to see other children, Katie's groupa, etc. unless the children were in the hallway or playing outside.
5.  What was the strangest food you ate in Eastern Europe?
We didn't eat a ton of weird stuff.  We stayed in an apartment, so we prepared 99% of our meals, and we stuck to recognizable foods at the market.  We did eat this weird meat roll up thing that Chris loved and I thought was disgusting.  It wasn't necessarily "weird", it was just gross.  We also got a frozen pizza that I am pretty sure had fish on it, which was not so great.  Overall though, the food we ate out was amazing.
6.  Overall, how's Katie adjusting to American living?
In a word, amazingly.  Katie is an incredible child.  From literally the day I picked her up at the orphanage, it has been like she was always our child, and that is because of her and her adjustment.  She has had NONE of the scary orphanage behaviors or adjustment issues.  I almost hesitate to post that, because I'm sort of waiting for the other shoe to drop.  She eats well, sleeps well, and is bonding well.  We have tried to have very low expectations, mostly so we are not disappointed, but she has FAR surpassed any expectations we could have had.
7.  How are your boys adjusting to having Katie home?  I'm especially interested in how your oldest is adjusting. 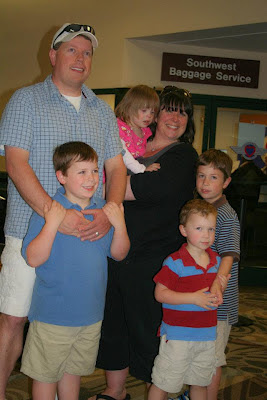 I was especially interested in how the boys would adjust as well, particularly David.  For those of you unfamiliar with our story, David has some special needs of his own.  David's needs are not of the obvious variety, such as Down syndrome, so to meet him you would never know he is any different than any other eight year old boy.  Quite honestly, right now his needs are almost non-existent.  It sort of comes and goes in waves.  In fact, David has been discharged from occupational therapy because he's doing so amazingly well.  Chris and I were anxious about how David would adjust to having another child in the house, especially one who can be loud, unpredictable, and curious.  David has been remarkable.  He, in typical 8 year old boy fashion, can really take Katie or leave her.  He's excited she's here, and he loves her, but he doesn't care to play with her or have much to do with her typically.  His biggest adjustment issues have been that she's a messy eater, that she sometimes is loud when he is watching TV, and that she wants to touch his Legos.  We've come up with solutions for all of that, so he has been fine.  He has really surprised us, and I'm so proud of him.
Henry had to understand that Katie wasn't as excited about him as he was about her.  He wanted to be in her face all the time.  That made her want to hit him at first.  Now, they are in love with each other.  Katie wants Henry to hold her all the time, he gives her piggy back rides, and she sits on his lap to watch TV.  Henry is very much a nurturer and a little love bug, so he's thrilled that she wants to get so much love from him. 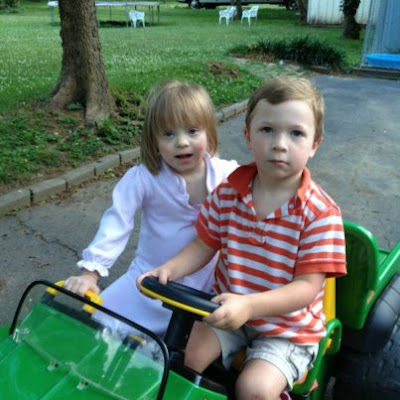 Jack and Katie are quite a pair.  Jack has definitely had some jealousy issues, which we expected.  They mostly manifest themselves in Jack getting LOUD when Katie needs something, or just generally making sure we know he's around if someone else is getting attention.  That has improved some, but is still something that we are seeing.  We try to make sure that he gets some special one on one time, lots of snuggles, and knows that he's still just as important.  He love, love, loves his "little sister" (who is older than him) though, and he takes his job as her "big brother" very seriously.  This transition has been the easiest addition of a new child to our family that we have experienced.
8.  How old is Katie?  How is she doing with communicating?
Katie just turned five this month.  Her communication when we picked her up was essentially non-existent.  She was non-verbal and could only say "da".  She would communicate by pointing and grunting.  She knows about 20-25 signs now and uses them frequently, and also will verbalize about 10 words.  We have zero trouble communicating with her.  She understands everything we say.  We have her speech therapy evaluation on Tuesday and I'm so excited for her to start speech.  I know she's going to blossom quickly.
We are so lucky to have this incredible little girl!
Posted by Unknown at 08:08