We went to our town's annual Christmas Tree lighting on Saturday.
The first time we went was in 2010, just a couple of months after we moved to this house.  I remember being so surprised that there was a pot luck dinner . . . for the entire town.
This has become one of our family's favorite Christmas traditions. 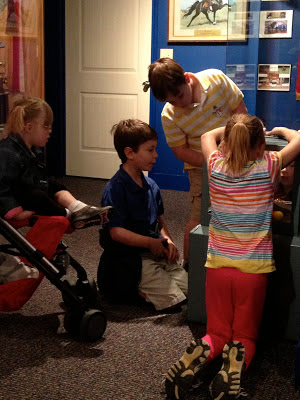 This year we started by going to the newly opened Tennessee Walking Horse Museum.  Walking horses are a big, big deal in our county, and I was really pleasantly surprised by the museum.  The kids loved it. 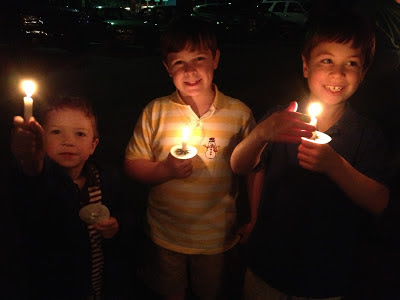 At the tree lighting, we sing carols by candle light.
And the "by candle light" portion always makes me want to gobble Xanax like candy.  Seriously?  Candles and three little boys? 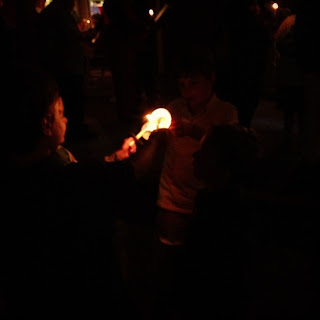 They all got their candles taken away by the end of the songs.  Each year I say we will decline the candles, and each year for some reason I let them try.  And then feel like I want to go running up the hill back to our house to hide while they burn the town down.  Oh well - there's always next year. 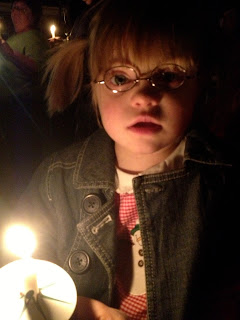 Little K did not have a candle.  I did, however, hold one close to her and she kept blowing it out and saying "hot".  We've come a long way baby!  Six months ago she would have just grabbed that flame without looking back. 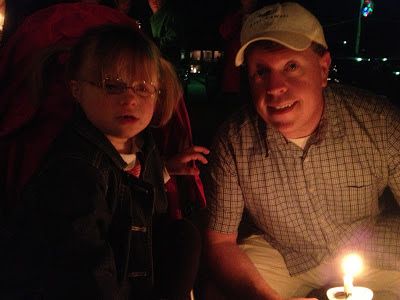 She looooved the singing.  And "sang" right along.  And there was some witchy woman there who shushed Katie, loudly, twice, while simultaneously giving that sweet baby dirty looks.  I dared her to do it a third time, you know, by the ugly look I gave her.  I seriously, in some deep mean part of myself, wanted her to do it again so I could say something to her.  I was so angry about it.  Especially when I heard David saying to a boy who asked if Katie was singing, "Yes, she has a hard time talking, but that's how she communicates."  My eight year old understands that, but a mean 60 year old was pissed because a five year old in a stroller was singing louder than the woman wanted, at a group singing event outside.  Merry Christmas. 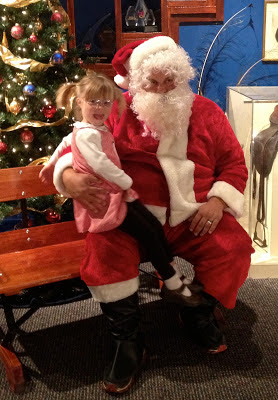 Katie loved her some Santa!  And, if I'm being honest, Santa didn't really seem to be loving the gig.  Katie was not deterred.  She climbed right up there and smiled at him. 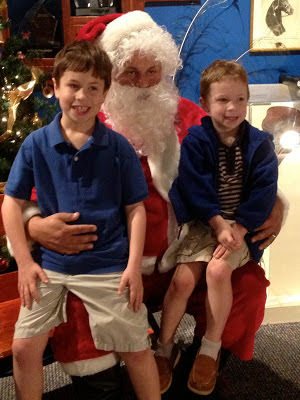 Jack and, shockingly, David both also sat with Santa.  Jack told Santa he wanted guns for Christmas and David said, "I can't think of anything right now." 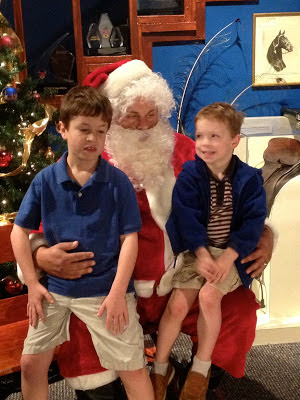 This wins the prize for my favorite photo of the night!  Jack is looking with adoration at Santa, Santa looks like he wants to kill Jack, and David looks like he has to go to the bathroom.  HILARIOUS!
Henry didn't want to see Santa because he said, "He's a phony!"  Nothing gets by Henry.....
Posted by Unknown at 02:12