Trip One, Day One.

So, day one of our first trip didn't go exactly as planned.  Like, at all.  We were all packed, ready to go, and out the door exactly when we needed to so we could get to the airport in Nashville with plenty of time to go through security, check our bags, et cetera.  We said our goodbyes to the boys, which went better than expected - nobody cried, but David was a bit upset.  I think he got over it pretty quickly once we were gone.
My parents brought us to the airport in Nashville and saw us off.  We checked our bags, and both were under the maximum weight which was a fabulous surprise!  There was no line at the security area, and we were through in less than five minutes.  We both got a book at the bookstore and had some Mexican food for lunch. 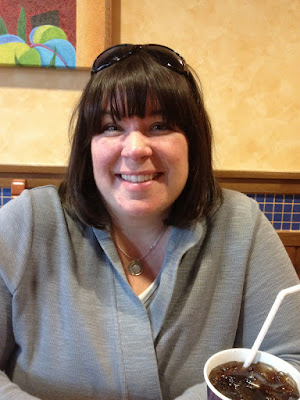 We sat down at our gate with about an hour until our flight would start boarding.  I was reading my book and Chris was playing a game on his phone.  We knew we would have to rush at Dulles to make our connecting flight, because we only had a 45 minute layover.  About 10 minutes after we made ourselves comfortable waiting, I looked up at the screen that displays the arriving and departing flights, and our flight was blinking DELAYED.  For real?  I didn't really get nervous at that point.  I did when the get workers came and announced that our 1:28 departure wouldn't happen until 4:20.  Four.  Twenty.  The plane we were to get on was coming from Chicago and was delayed because of strong winds.  Then we wouldn't leave for DC because there were strong winds in DC.  That meant our plan from Nashville was leaving twenty-five minutes before our plane in Washington DC.  Um, that won't work.  And our plan from DC?  A direct flight to Katie's country.
So I got in line to see what we could do.  I was the third person in line, and I had to wait over an hour.  Not a good sign.  Also not a good sign?  The look on the ticket worker's face when she was trying to find us flights. 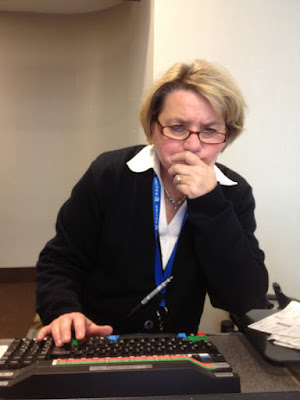 She ended up putting us on a flight that would get us to DC and give us ten minutes to make a connecting flight to London.  From London we would go to Katie's country and would arrive on Sunday night.  We knew that would obviously be difficult, but at least we were moving forward, not staying in Nashville.  The only other options were flights that would get us to Katie's country on Monday evening, and our appointment to get permission to see her is on Monday morning.  So we got on the tiny plane from Nashville to Washington D.C.   And they had to check my carryon bag at the gate, because they said it wouldn't fit in the overhead compartment on the little plane.  (It would have.)
Our flight to Washington was fine.  It was quite bumpy, because it was so windy.  Once we landed, we knew we had to book it - remember, we only had ten minutes.  Well, we also had that checked carryon bag.  We had to wait ten minutes outside next to the plane for them to unload the gate checked bags.  And then we had to run to the next concourse to our flight.  We got there two minutes after it pulled away from the gate.  Literally, two minutes.  If that bag hadn't been checked at the gate, we would have made it.  We were so, so disappointed.  So the woman at the gate sent us from gate D-7 to the customer service desk at C-20.  It's probably a quarter of a mile away, literally.  (And we had come in on our flight from Nashville at gate C-18.)  We got to the customer service desk and saw this: 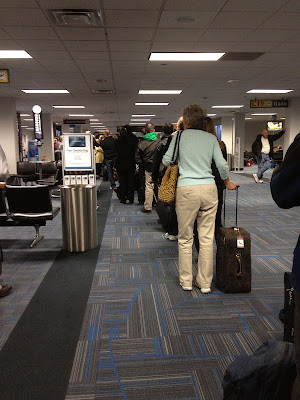 There were easily fifty people in front of us.  Um, if it took me an hour to get helped when there were three people in front of us, how long would this take?!  But what other choice did we have??  It was now after 7:00, and we had made it 600 miles from home.  Only 4,700 to go!  So we waited.  And waited.  And waited.  And then a man who I think was a baggage handler came by and said, "Do you want a shorter line?  You can do the same thing down at D-18."  At that point I wanted to scream obscenities.  Why in the world would the people sitting on their butts watching the world go by at gate D-7, where we missed our flight, send us back to the C concourse when we could have done THE SAME THING right down the hall from where we were?  So I sent Chris up to D-18 to see situation there while I waited in line and told him to call me when he got there.  There were three people in front of him in that line.  So I walked the quarter of a mile back up there to change our tickets. 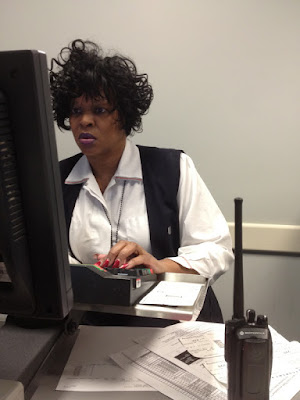 I'm going to tell you, this woman didn't make things look more promising.  And she was either working really, really hard to find us flights or she was on Facebook, because she didn't speak for five minutes.  And of course by this time, there were no options available that would get us to Katie's country on Sunday.  And she tried to put us on a flight that connects in Frankfurt with less than an hour to change planes.  And get our baggage, and go through customs. . . um, no.  Despite the fact that there was a flight leaving DC on Lufthansa that would connect in Paris and get us there Sunday, and the gate worker in Nashville told us to ask about it.  And this woman told us, "We can't pay to put you on another airline."  Um, then WHY DID SHE TELL ME TO ASK?!  I was furious at that point.  Especially when she slid the "reduced rate hotel voucher" over to me.  After all of that, we got the privilege of paying for a hotel room, because "It's not the airline's fault you were delayed."  Hello.  It's certainly not our fault. . . Needless to say, I will be sending a very carefully crafted letter to United Airlines to voice my displeasure at the situation.
We got the hotel shuttle (which took 40 minutes to come) and checked into our hotel.  Which I admit is nice. 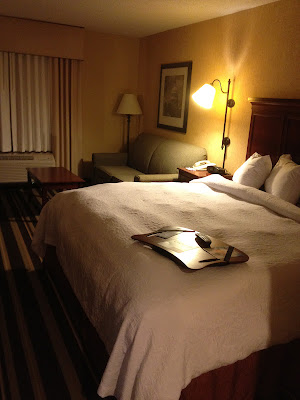 We ordered a pizza, which tasted like the best food ever at that point, and hung out watching some t.v.  Things could have been much, much worse.  We could have been sleeping on the floor of the airport.  We could have not been able to afford a hotel.  We could have been eating granola bars instead of pizza.  In the grand scheme of things, we were fortunate.  We don't leave until after 5:00 today, so we will hit a museum during the day and then head to the airport.
So now what?  Now we will arrive in Katie's country Monday evening.  We may be able to get an appointment on Tuesday to get permission to visit her at the orphanage.  We may not be able to get permission until Wednesday.  We will miss at least one, maybe two days of visits with her.  That will mean we may only get to see her twice.  Clearly that's disappointing to me.  That will mean our second trip will have to be longer so we can get the required number of visits in before court.  But we will get there, and we will see her.  It's not on the timetable we planned, but it will happen.  Please pray that we have no other issues or delays today!
Posted by Unknown at 05:26