Surviving the Spica: Bracing Ourselves

Slowly but surely, we're getting used to the brace.
Each morning when she wakes up, she immediately says "Boo boo!  Boo boo!"  When she was sleeping without the brace, she would say that also.  I think when sleeping without the brace, the muscles (which are already stretched and loose) holding her femur in the hip socket would relax even more, which caused the head of the femur to slip out of place and become partially dislocated.  When sleeping with the brace, I think it hurts because it's keeping all of her muscles and ligaments where they're supposed to be, not where they are accustomed to being.  As a result, she's stiff and sore because nothing is working like it was before, even though it wasn't working properly. 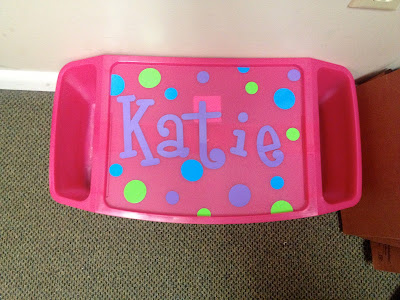 A sweet friend of mine picked this lap desk up for Katie and decorated it so cute with her name.  I think this will come in handy. 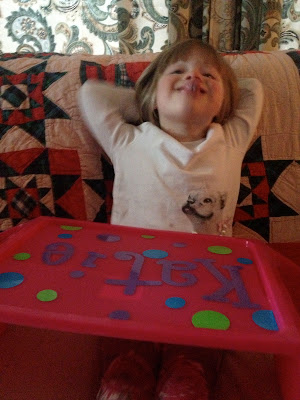 She quickly learned what it was all about and dragged it around with her for the rest of the night.
The doctors said "life as usual" with the brace.  Do you think they meant Duck, Duck, Goose in the trampoline? 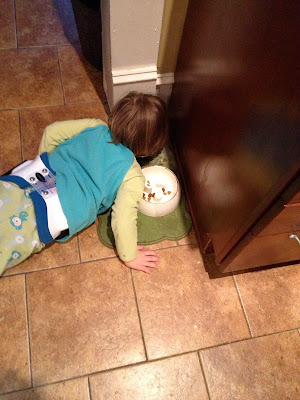 I'm pretty sure they didn't mean "lay on your belly and drink water out of the dog's bowl".  Whatever. 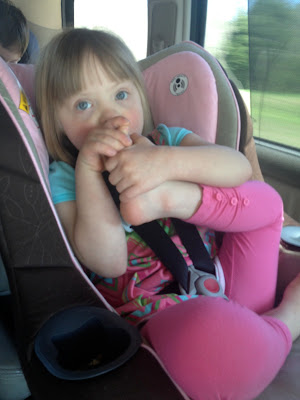 And just to give you some indication of her flexibility without the brace . . . Can you suck on your big toe while riding in the car?
Today she has her sedated CT scan and pre-op appointment.  The worst part about today's appointment will be that she can't eat anything after 7 a.m., and her appointment isn't until FOUR this afternoon!
Eight more days until surgery!
Posted by Unknown at 02:40