Surviving the Spica: Change in Plans

Monday Katie and I were back at Vanderbilt for her pre-op CT scan. 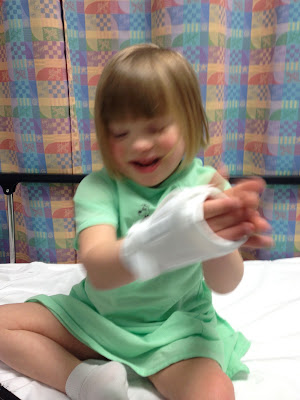 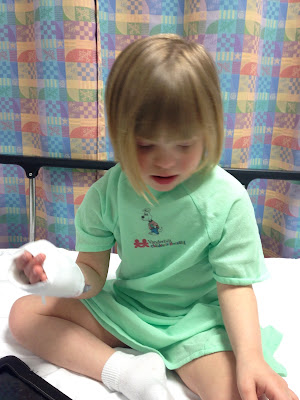 Katie was a trooper!  She didn't cry at all when they put in her IV - she just looked at them and said, "BOO BOO!"  She was more irritated by the cover they put on the IV than anything else. 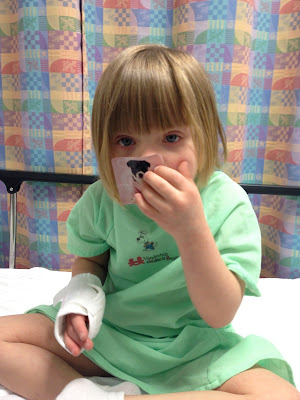 She couldn't eat anything all day long.  And by all day I mean after 7 a.m.  I would be miserable if that were me, and Katie was completely normal.  I guess maybe four years and eleven months in an orphanage makes you more able to withstand hunger.
So then while we're waiting for her to be taken back the child life specialist brought her a toy to play with . . . it was pretend food.  Uh, she hasn't eaten all day!  She tried to each each thing in that basket. 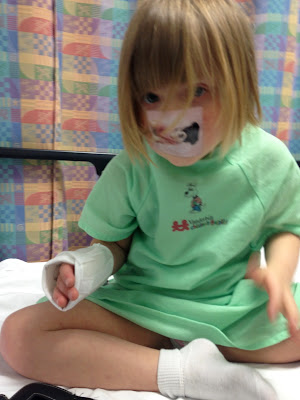 When we were discharged, the doctor who did the scan told me that I could call her surgeon Wednesday to get the results of the scan.
Wednesday morning at 8:00 I called the doctor and left a message for a nurse to call me back and let me know about the scan.  And then I sort of forgot about it.  My phone rang around noon, and it was Katie's doctor himself calling.  The first thing he asked me was how the brace is working out.  He then proceeded to tell me that the scan didn't show him what he was expecting.  What he planned to do in surgery on the 16th was essentially to reshape her femur and reposition it in her hip socket.  The scan showed him that her bones "look beautiful".  While that sounds great, it means she can't have the surgery that he was planning to do.  You know, the surgery that was going to fix this dislocation issue. 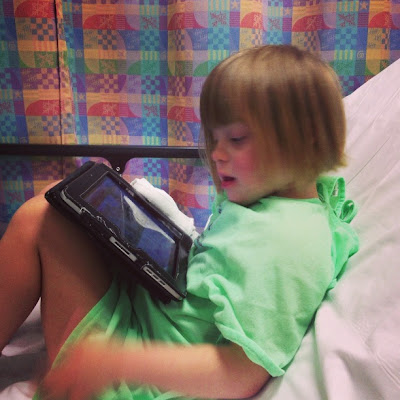 Now?  Now we don't know why her leg is dislocating.  He said since it's not a bone issue, it is a soft tissue issue (say that ten times fast).  He said he was disappointed that this is what he found and that, in her situation, it is the worst case scenario.  Not what I wanted him to say.  We had a very lengthy conversation and he discussed a lot of possible options, one of which is continuing to wear a brace until her growth plates close and then operating.  Hey!  Her growth plates will likely be open for five more years!  That would not be fun.  At all.  Five years of not fun at all, in fact.
What's the plan now?  Uh, we don't know.  And I hate that.  With the surgery, we knew it would be a big surgery.  We knew there would be lots of painful days and sleepless nights.  We knew we would have to deal with the spica cast and a long recovery.  We were ready.  We knew that it would likely resolve the issue.  Now?  Now we are back to knowing nothing.  Well, I guess we know slightly more than nothing, as we know that she has hip dysplasia on the left side.  But we sure don't know what to do about it!
Tuesday we will go to the surgical appointment as scheduled.  Her doctor will sedate her, dislocate her leg while she's sedated, and watch with some special camera he has to see what happens when her leg dislocates.  He will determine if she dislocates to the front or back or both, and what her muscles, tendons, and ligaments are doing when her leg dislocates.  And we'll figure out from there what we can do.  She will also still get her tubes placed (in her ears) as scheduled, and I hope that will help with her speech.
Because of her young age and because of her Down syndrome (which means her soft tissue is already far more relaxed than a "normal" person) he did not sound very optimistic that there is a real fix at this stage.  He does believe that when she had her first episode of dislocation that we are aware of (which was in September) she damaged the soft tissue around the ball of the femur in the hip socket.  Because her leg continues to dislocate, that tissue has never healed and just keeps re-injuring.  One thing he mentioned was having her wear the brace to keep the leg relatively immobile and allowing that tissue to heal and scar, which may help to keep her leg in position.  My prediction is that we will leave Tuesday with no more real answers than we have now.  I think he will tell us to wear the brace and come back in six months to re-scan.
I'm disappointed, and I'm discouraged.  I wanted this to be fixed.  I wanted to get on the road to healing.  I didn't want her to have to endure such a painful process, but I knew it would be worth it in the end.  Is this the end of the world?  Absolutely not.  She could have so many bigger, more challenging things to deal with.  A brace is not going to kill us; it will merely inconvenience us.  If that's what we have to do, we will do it.  It is just disappointing to think we have an answer and find out that we in fact don't.  I'm keeping a very open mind about it and we will roll with whatever our doctor tells us.  I trust him completely, and he is very knowledgeable about the hip and particularly hip dysplasia and children with Down syndrome.  I firmly believe we could not be in better hands.  We'll figure this out for my girl - it must may not be on my timetable, and that's OK!
Posted by Unknown at 06:54