Surviving the Spica: No Spica Needed! 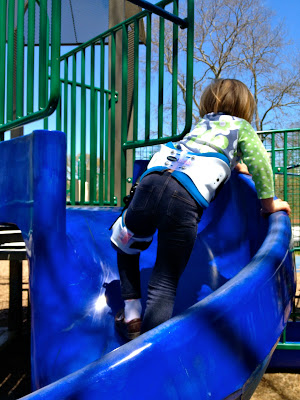 Last Saturday, Katie and I met Chris' parents in Nashville to pick David up.  He had been with them overnight for his special birthday weekend.  Katie was all over the playground with her brace on.

It made me sort of sad while we were there to think that she was likely going to have to wear this huge, cumbersome brace for the indefinite future.

It didn't stop her from doing much, but it's certainly a pain.  And let's be honest - it is exceptionally obvious, and for a child who already has a disability with physical features that people think are different, we've got enough different going on; we don't need a brace too.  Katie, however, really didn't seem to care about the brace.  She hates wearing it, takes it off and hides it, yells when it's time to put it on, and slaps it on her leg, but she tolerates it. 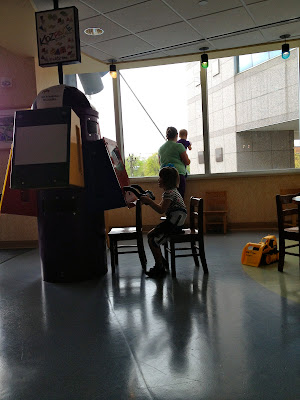 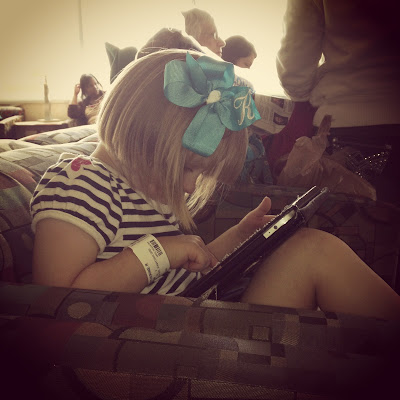 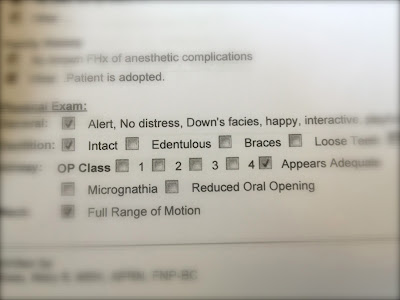 I cracked up when I saw this on her pre-op intake information.  "Down's facies".  I guess that could be offensive to some people, but according to the dictionary "facies" means "a facial expression characteristic of a pathological condition."  It sounds like a word Jack would use. 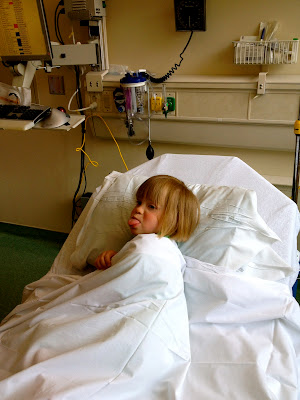 Once we got moved back to the pre-op section, Katie knew what was up.  And her patience went out the window.  We had to wait a little longer than normal, because her ENT doctor wasn't actually in surgery that day; he was seeing patients.  We knew that, and I'm so appreciative that he was willing to run over to do her tubes so she didn't have to be anesthetized on a different occasion for it.  We have the best doctors!

Her exam by her orthopedic doctor was quick.  Chris and I were STARVING by the time they finally took her back (no eating or drinking in the waiting room, as none of the children in there can have food or drink) and ran downstairs to the dining area to get something to eat.  As soon as we came back up, they put us in a consult room to wait for her doctor.  He had a big smile on his face when he came in and said he had good news and bad news.  The bad news was that he couldn't get her hip to dislocate, no matter what position or with what force he tried.  It would not come out of the socket.  That's also great news!  Based on her symptoms when she "dislocates" and the fact that he couldn't get it to dislocate at all, he is quite confident that she doesn't, in fact, have hip dysplasia.  That's the best news we could have gotten.  Hip issues for people with Down syndrome are life long problems. 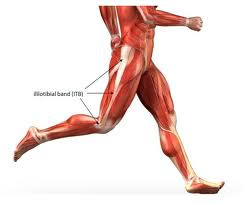 He now believes that she has iliotibial band syndrome.  Essentially what is happening is that the iliotibial band (the huge band of muscle that runs down your thigh) is getting hooked on part of her hip, and it gets stuck.  When that happens, her leg is stuck in the same position it would be if it were to dislocate.  He said that the symptoms are essentially identical.  It is excruciatingly painful, the leg is locked in one position, and you hear a pop when the muscle releases (as you do with a hip dislocation when it pops back in).  All of that describes what has happened to Katie.
It's an injury that a lot of runners get, but it can also be caused by:  flat feet, supination of the feet, excessive lower leg rotation from pronation of the foot, bowed legs, weak hip abductor muscles, and a weak multifidus muscle.  (You may note, all of those causes are also issues for people with Down syndrome, including Lady K.)  This is a much better problem for her to have than hip dysplasia.  This can be repaired with a surgical procedure, which is far less invasive than the osteotomy we were anticipating.
The plan now is to go back to see him in three months.  No brace until then!  YAHOO!  He wants it to happen again.  If/when it does, we are to take pictures and video as much as possible, then get her to an ER and have them x-ray the leg in the "dislocated" position without repositioning her legs so he can be one hundred percent certain that the hip is in the socket when she has this issue.  We are very encouraged and feel good with the results.  And never in my life have I so badly wanted her leg to "dislocate" again!
Posted by Unknown at 02:51