Last year, on February 28th, we met Katie for the first time.  That day we first went to the Ministry of Education to receive Katie's file information and to be granted permission to go to the orphanage to meet her.  I was way more nervous about that appointment than I needed to be!  The most nerve wracking thing about it was riding in an elevator with a footprint literally just slightly larger than the square footage of my laptop.  For real.  I'm nearly certain it would qualify as the world's tiniest elevator.  The best thing about that appointment (other than getting permission to meet Katie, duh) was eating at the bakery next door.  They had the most amazing pastries ever.  I wish I could go back to Russia merely to go to that bakery...
After receiving permission to go to the orphanage, we piled into our driver's van with our translator and our facilitator and headed out to the institution.  We had no address - just directions - and nobody in the car had ever been there before.  I told you, this was a trip completely based on trusting strangers!  Three hours later, we pulled up to the gates of the institution.  I was so excited I felt like I could throw up.  Once it was determined which building she was in, we parked the car and walked through the snow to her pink building.  I was immediately impressed with how clean everything was.  I'm not sure what I was expecting, but it wasn't candy colored buildings with play equipment everywhere and cartoon animals painted on the walls of the huge fence surrounding the compound.
We were the first people to ever go to the institution to inquire about adopting a child.  Any child.  The institution had been open for twenty-five years.  Please think about that. . . twenty-five years of existence, and Katie was the first child ever adopted from the walls of that institution.  There were about 250 children there when we were there.  How many children have been through there, never to know what it's like to be in a family?  And what happens to them when they turn 18 and "age out"?  That's twenty-five years of aging out.  That's thousands of children, who never had a family.  And it was a very nice facility, with very nice staff.  But that's not enough.  They are not a family, and it's not a home.  The staff didn't even know where to put us, because nobody had ever come to visit a child before, wanting to adopt.  (I should add that some of the children there are in that particular institution because their parents are dead, in jail, or otherwise cannot take care of them; not every child who is there is eligible for adoption.  Most are though.)
We were led to a tiny room (about the size of a large walk-in closet in the U.S.) just off of the lobby of Katie's building for our visit.  Chris and I sat, impatiently, whispering to each other in that tiny room while our translator, facilitator, and driver were in the hallway talking to the doctor and assistant director of the facility.  About ten minutes later, we heard what I know now as Katie's yell in the hallway.  And in pranced a tiny four year old with a bow on her head the size of a dinner plate and big blue eyes that matched Jacks' perfectly.
She was, understandably, a little confused and hesitant at first.  She really liked the photo album we brought for her, and she was much more comfortable on the "psychologist's" lap than anywhere else in the room.  At first.
The staff doctor came in with her file and gave us her medical information, which I half listened to.  I felt bad about that until she came home and I realized that it was less than half accurate, so I'm glad I spent that time watching Katie and soaking her in. 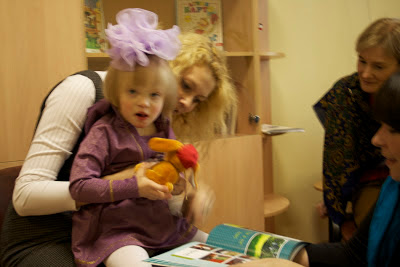 After the doctor left, I pulled out our bag of toys and I won her over with what came to affectionately be known as "the electro-shocker". 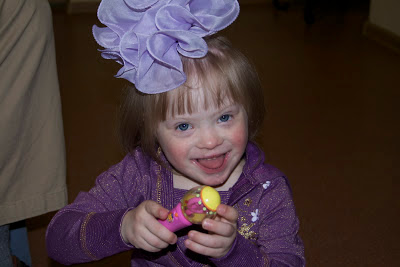 Once we broke the ice, there was no turning back.  She was my sweet thing and her daddy's girl from then on.
For Metcha Day Katie wore her prettiest dress (which was a lovely gift from Sarah and Joyce) and brought some treats to school to share with her friends. 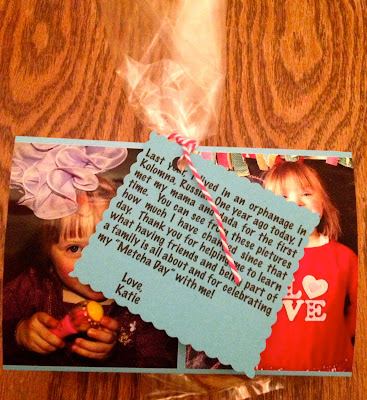 I put ginger snaps like the ones we had at her orphanage and another cookie similar to one we had in Russia in these bags, tied them up with baker's twine, and tied a tag to the front.  The tag says, "Last year, I lived in an orphanage in Kolomna, Russia.  One year ago today, I met my mama and dada for the first time.  You can see from these pictures how much I have changed since that day.  Thank you for helping me to learn what having friends and being part of a family is all about and for celebrating my "Metcha Day" with me!  Love, Katie"
Because her birthday is in the summer, she won't get to celebrate that day with her friends at school, so I thought celebrating Metcha Day was more than appropriate. 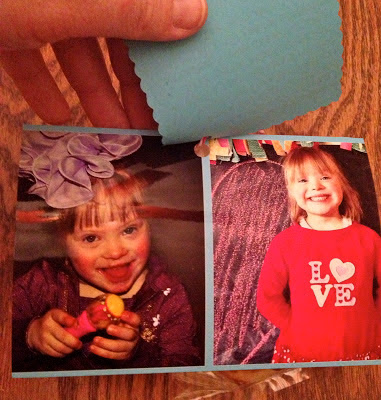 The photo underneath shows a photo of her the day we met and a Valentine's photo.  Look at how much she has changed! 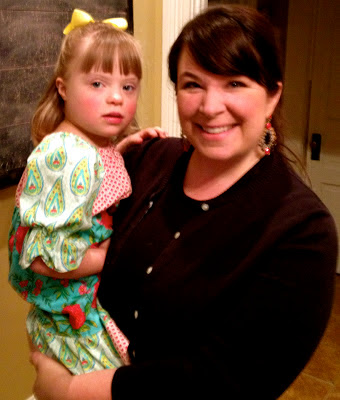 It would be impossible for me to detail every way Katie has changed since that day.  She's clearly changed physically, but her emotional changes are far greater.  She is an amazing, spunky, smart, sassy, affectionate, silly, fun, beautiful, loving, sensitive girl.  We are so lucky to get to be part of her life.
Happy Metcha Day big girl!
Posted by Unknown at 03:16