1.  Surgery.  Since finding out last week that Katie will need surgery to address her Developmental Displaysia of the Hip (DDH), I have become a woman obsessed.  This surgery will be 3-5 days in the hospital, and 4-6 weeks at least in a hip spica cast.

3.  Casting.  We anticipate her cast will go around her back and belly and down her left leg.  The left leg/hip must be completely immobile while casted to ensure it heals properly and we don't have to repeat surgery.
4.  Sweating like a little pig.  Did I mention this cast will be on in July?  In Tennessee?  Her summer wardrobe should be very, very small.  Like, naked.
5.  Car seats.  I haven't even let myself go to the recovery process yet with my thinking.  I'm stuck on the immediate things, like how will we get her home from the hospital?  Katie doesn't weigh enough to be in a booster seat yet.  And, quite honestly, even if she did weigh enough it wouldn't be safe enough.  She still needs a five point harness.  I couldn't trust that she wouldn't unbuckle while we're driving, because I just don't think she understands that yet. 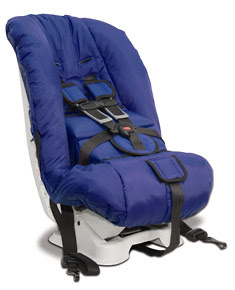 The Britax Hippo is one option for the car.  It's crazy expensive, but I believe it should be covered by our health insurance.  And we're obviously going to have to go places with her while she's in the cast.  This sounds less than appealing to me.
Another option is a harness, but that would require her to lay down in the car and with four car seats we don't really have that vehicular real estate available.  I'm also going to check with the hospital to see if they have a loaner program so we don't have to buy a seat.
6.  Entertainment.  Another huge concern I have is how we will keep her occupied for six weeks in a cast.  I see lots of television and iPad in her summer future, which I don't love.  Any other great ideas for a stationary child with limited range of motion who doesn't like to sit still for 5 minutes?!
7.  Eating.  How about eating?  How exactly does that happen in this cast?!  I'm not sure if she'll be able to sit up, so right now we're planning to use her stroller a lot (which reclines) and just push her up to the table to eat.
8.  Sleeping?  She sleeps upstairs in a double bed right now.  We plan to have her sleep downstairs in our room while she's got the cast.  At first I expect she'll need meds, etc. through the night.  Once she gets more used to the cast and more comfortable with it (does that happen?!) I don't want her to try to get out of bed with the cast on.
9.  Bean bag chairs.  A bean bag seems to be a must have for a spica cast.  The children may all need one, because I see some bean bag envy coming right up if only Lady K gets one.  I'm thinking about making them - that cannot be a difficult or expensive thing to make, no? 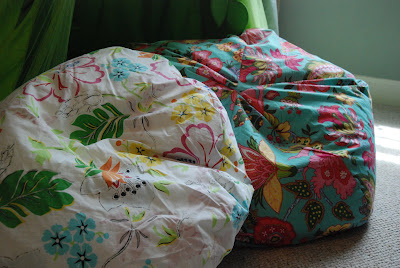 10.  Cooking.  I am going to make a plan this weekend for meals that can be prepared ahead and frozen so I have our freezer stocked when we go to the hospital and for the first days/weeks when we come home.
11.  Work.  I will have to take time off to stay in the hospital with her while Chris is home with the boys, and I will really need to go back to work the week after the surgery.  Obviously if we have issues, etc. with her surgery I will have to figure something out, work partially from home, or something similar, but right now my plan will be to return to work the week after surgery.  She's scheduled for a Tuesday procedure, so I will plan to go back to work the following Monday.  These are the times I wish that I was still a stay at home mom.  I love, love, love my job and the people I work with, but things like this are difficult on my mama heart.  And guilt in about 100 different directions.
12.  These sweet loves. 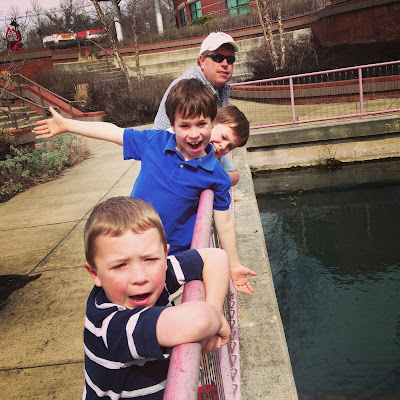 Chris will have the bulk of the work because he will be home with three boys and one immobile girl for the majority of the summer.  I am going to start looking now for some camps for the boys, particularly for after the cast is on.  There goes the "raise" we were getting by not paying for Jack's private pre-school after May. . . Chris is an amazing daddy and husband to our family and he take phenomenal care of the kids and the house while I'm at work.  Seriously, how many dads could do that or would be willing to?  But a hot summer with a spica cast girl and three rowdy boys will be tough.
David and Henry will be worried about Katie but I think will be big helpers.  But I don't want them to think they have to be.  Nor do I want them to spend the summer inside on the computer or playing video games.  Must. Find. Camps.
My sweet Jack Jack. . . he gets loud and even more wild (if you can imagine) when he's worried about something or feels like he's being left out.  He's still struggling a bit in his own way with the changes to our family since Katie came home.  We will need to be extra sure to make some special one on one time for him during the summer I think so he knows he's still special.  Even if he is a little loud time bomb waiting to happen.
Happy Tuesday!